Ice cream bombes look exotic but can be surprisingly simple. Just use a good ice cream for the outer layer, surrounding a light, sweet, mousse filling. 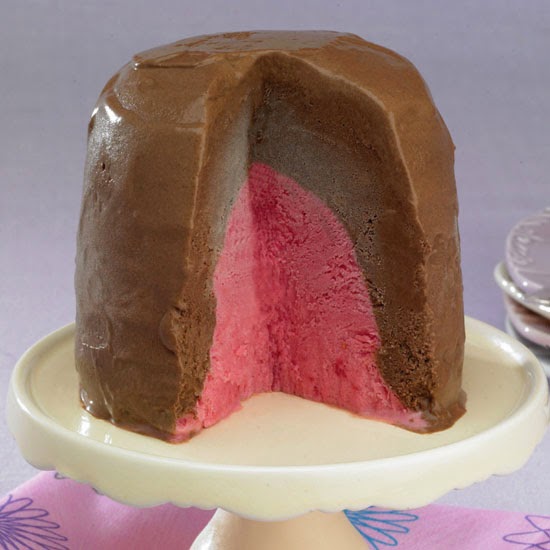 
In the freezer, chill a 3 1/2 to 4-cup bombe mold or metal bowl. Prepare the gelato. When it is a spreadable consistency, set the mold into a bowl of ice. Line the inside of the mold with gelato, making sure it is a thick, even layer. Smooth the top. Put the mold immediately into the freezer and freeze until really firm. Meanwhile, whip the cream until stiff. In a separate bowl, whisk the egg white until it forms soft peaks, then gently whisk in the sugar until glossy and stiff. Fold together the whipped cream, egg white, and strained raspberries, and chill. When the chocolate ice is really firm, spoon the raspberry mixture into the middle of the bombe. Smooth the top, cover with waxed paper or foil, and freeze for at least 2 hours.

About 20 minutes before serving, remove the bombe from the freezer, push a fine skewer through the middle to release the air lock, and run a knife around the inside top edge. Invert onto a chilled plate and briefly wipe the pan with a hot cloth. Squeeze or shake the pan once or twice to see if the bombe will slip out; if not, wipe again with a hot cloth. When it slips out, you may need to neaten the top surface with a small palette knife, and then return to the freezer immediately for at least 20 minutes to firm up again. Serve, cut into slices, with the raspberry sauce. This bombe will keep for 3 to 4 weeks in its pan in the freezer.

Prepare the basic recipe, but replace the raspberries in the filling with bananas mashed with 1 tablespoon lemon juice. Serve with chocolate sauce.

When preparing the basic recipe, replace the raspberries in the filling with 6 tablespoons coffee syrup and 1/4 cup toasted sliced almonds. Serve with heavy cream or a coffee liqueur poured on top instead of raspberry sauce.

Prepare the basic recipe, but replace the raspberries in the filling with canned chestnut purée, mixed with 1 tablespoon each chopped candied ginger and candied citrus peel. Omit the raspberry sauce.
vào lúc 6:56 PM